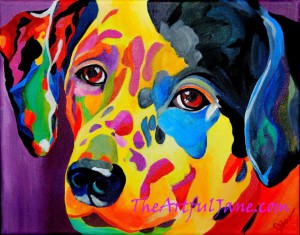 Never met a Dalmatian as full of color as Maggie! This ten year-old gal is very much loved by the young couple that she belongs to. Dalmatians are normally black and white, but this is not your normal dog, it is Maggie! Maggie is learning to howl at ten years old and the spots on her face not only show the wonderful colors of her already HAD adventures, but also, the many fun and exciting ones for her YET to have! Enjoy Maggie’s story as written by her owner Jules Norwood.

” Maggie’s dad, Jules, was just out of college when a buddy stopped by with a puppy and said there were more in the litter that needed homes, or they would end up at the pound. So they set off into the countryside of rural Eastern North Carolina (Chocowinity to be exact).

Three pups were left, two all-black males and Maggie, who to this day still hasn’t figured out whether she’s white with black spots or black with white patches. After three baths and hours of brushing, she was finally flea free, and Jules had the cutest Dalmation-mix puppy he’d ever seen. From Day one she was sweet, energetic, and just a touch crazy. For more than a decade now she’s been by his side, through several new jobs, relocations, and major life changes. She loves walks, tug-of-war, and most of all, boat rides.

When Jules met his wife, Arwen, Maggie took to her at once, and Arwen has come to love Maggie almost as much as Jules does. Both agree that she’s the best dog ever. Maggie also quickly endeared herself to Jules’ mom, even though she thought at first that he had no business getting a dog at that point in his life! After a few walks and naps together, they were fast friends.

Now 11 years old, Maggie still likes to run and play like a puppy; she just sleeps a lot more in between. She’s had some trouble with her joints but is just as sweet and adorable as ever. She’s even taken a liking to the newest arrival in the household, Jules and Arwen’s daughter Belle, who has brought yet another round of disruptions (and noise!) to Maggie’s routine. She likes to sneak in and give Belle a quick lick when she gets a chance, living up to one of her many nicknames, Maggie Licks-A-Lot.”