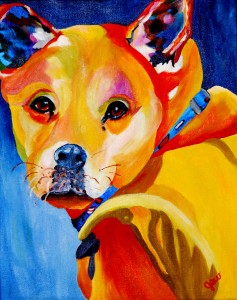 This painting was donated to the annual “FurBall” gala Fundraiser silent auction in New Bern, NC to benefit the Colonial Capital Humane Society and other area animal rescue groups.

Enjoy Maggie’s story as written by her owner, Becky Nordstrom.

“We adopted Maggie from the Four Paws Animal Rescue in Lincoln County when we were living in Charlotte. She was about two years old at that time. She was initially very frightened of us. We questioned if she may have been abused.

She quickly adjusted, and became a very docile, relaxed girl. She lived with us in Charlotte, NC, where she had lots of room to run and play . We moved aboard our boat in 2010. Moved to Little Washington, where she quickly adapted to marina life at Carolina Wind Yachting Center. She was known as the “dock dog”.

After living aboard for a couple of years, we began sailing up and down the east coast, spending the summers on the Chesapeake Bay, and wintering in Florida. Maggie has adjusted well with all our moves. She makes friends easily and is typically loved by everyone. She does very well with offshore passages— except with thunderstorms— she does not like those at all!!!

She is a delightful 13 year old gal– a vital part of the Nordstrom family.”