I’m truly ashamed…seems we in North Carolina hear and see some of our birds so much that we hardly give them the attention that we do other birds. Today was no different. Walking along the trail was what seemed to be Cardinals or sparrows making their sounds. But quickly, things took a turn…a “Blue” turn…when the sounds didn’t match what I was looking at making them, I couldn’t believe it. There in front of me was the deep cerulean blue colored Blue Grosbeak, a cousin to the Northern Cardinal! This was my first time ever seeing one! 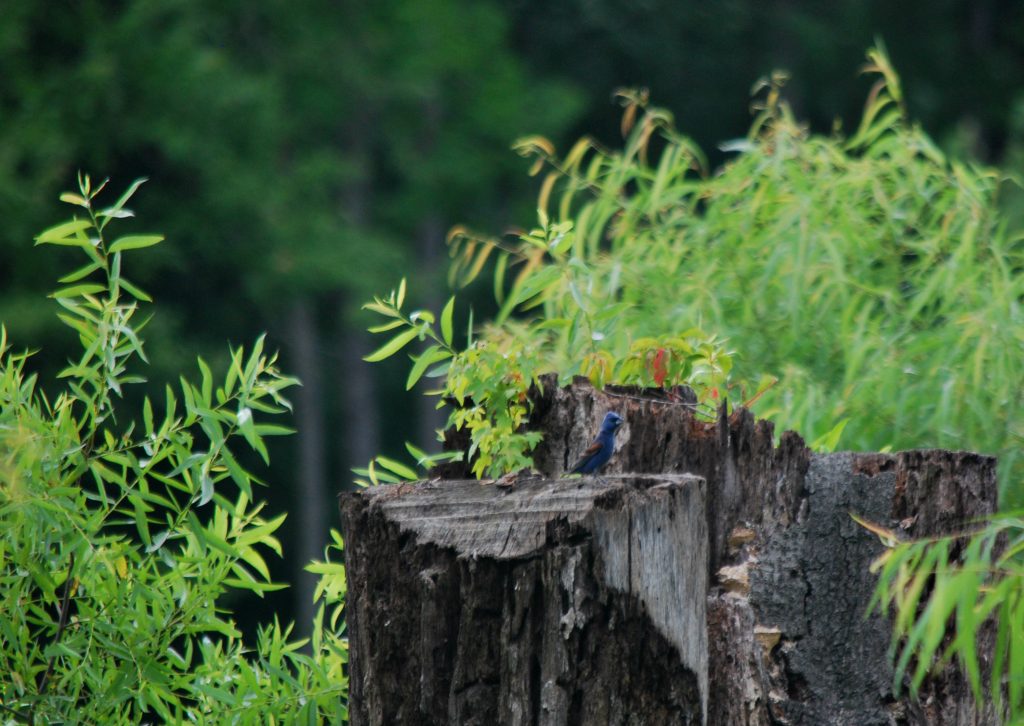 What a beautiful shade of blue accented by chestnut red on its wings. The Blue Grosbeak was a wonder of both vibrant color and familiar sound indeed. The beak had an almost aluminum blue sheen color to it.

Look Towards the Sound Anyway!

In not looking in the direction of the sounds I was hearing to see who it was, like I usually do, I almost missed a “first time for me bird”. The Blue Grosbeaks had the perfect area to nest in at Lawson’s Trail. Just to the RIGHT of the trail is an ascending embankment of Cypress trees, maples and Sweet Gums which provided them a place to find food. Below the trees, a prolific thicket of lower growing native  shrubbery and thick vines was a perfect place for their nest. The sounds I was hearing were coming from the LEFT side of the trail — from the edge the open swamp itself.

They Bobbed and Bobbed on the Branches…

They loved landing on old cut Sweet Gum stumps and landing in the light and airy branches of our native Black Willow trees. As the wind would blow, it made it hard to photograph the Grosbeak couple as the branches were moving about with each and every breeze.

Where was the Nest of the Blue Grosbeaks?

Interesting question. It surely was not located in the Black Willow trees. After reading about Blue Grosbeaks, I realized they make their nests in tangled up vines and thickets. Such would be the case here. Their nest was in the vine and shrub mixture growing just on the right of the trail. Through subsequent visits here during the summer into early fall, they maintained this same behavior as if to draw me away from their nest. I would hear them minutes before I could see them.  I only saw these two Blue Grosbeaks along this trail over those months…until they had babies!

The date of these photos is July 3, 2017. Per this photo of the female Blue Grosbeak, she appears to have some food in her mouth.

NOTE:  Fast forward to my August 28, 2017 visit to the trail. There were juvenile Blue Grosbeaks in the same exact spot. Quite fun to see. They were even more skiddish than their parents were at my presence on the trail. I stayed in the center of the trail and only moved the camera which I was holding when I saw them. Slowly I advanced on down the trail.

A Few Facts about the Blue Grosbeak (Passerina caerulea)

Any Other Birds Present in the Blue Grosbeak’s Community?

Yes, there were! First off, the family of CARDINALIDAE has many similar birds. From this photo, the Blue Grosbeak’s cousin, the beautiful red Northern Cardinal, pays a visit!

There are the four things you can learn from my taking for granted a Northern Cardinal’s frequently heard sounds and finding a Blue Grosbeak instead. Keep these questions in mind when you’re out birding:

This one is important and here’s some thoughts to always ponder in your observation of any birds’ habitat, particularly in a swamp area:

It’s easy to take for granted sounds we hear so frequently birding that we don’t stop to see who it is. Other species of birds often mix with certain other species of birds. I certainly am glad I didn’t just keep walking by when I heard the Northern Cardinal…I would have missed seeing this fantastic Blue Grosbeak!

This article contains affiliate links for your convenience (meaning if you make a purchase after clicking on the link, I may earn a small commission which helps to keep my blog up and going). This doesn’t cost you anything at all! Click here to read my full disclosure policy. My using affiliate links does not impact the content in this article. All thoughts and opinions are based on my own experiences